Coface Study: Retail Sale in Non-specialized Stores Sector – positive evolution of revenues in 2019, with a 10% increase compared to previous year

In 2019, farmers in Bucharest-Ilfov region spent more money on food and beverages per month compared to the other social categories

A new study conducted by Coface Romania on the sector of "Retail sale in non-specialised stores with food, beverages or tobacco predominating” (NACE 4711) indicates a positive evolution of revenues in 2019, which increased with approximately 10% compared to 2018, with a slightly higher profitability. The study aggregated the data of 46.571 companies that submitted their financial situation for 2019 (as of September 2020) and generated a consolidated turnover of RON 79.4 billion. The weight of the cumulative market share held by the most important 10 players is 63%, which indicates a medium to high degree of concentration.

The share in the total turnover of the top 10% companies in the sector remained at a high level (88.6% in 2015, in 2019 reaching the value of 89%). Thus, the sector is highly polarized, with some large companies generating a high share in the turnover and many small companies contributing less to the total revenues.

The companies operating in this sector registered a current liquidity of 0.99 during 2019, the working capital being exposed to negative shocks, in a context of volatility (lower revenues or non-collection of receivables). The average duration of debt collection in the analyzed sector decreased from 24 days, the level registered in 2015, to 17 days in 2019, while the national level for the same period decreased from 98 days to 89 days.

"The goods sold by companies in this sector have a lower elasticity to changes in consumer income, which ensures, in a way, a stable trend for the turnover of companies active in the field. However, it would be advisable for the players in this market to pay more attention to the financing structure of the activities, given that, at a consolidated level, the current liquidity for 2019 was sub-unitary, more than half of the companies reported a negative capitalization (indebtedness higher than 100%), and according to the indicator of Money Conversion Cycle with negative value in 2019, more than half of the companies (55%) resorted to supplier credit”,declared Nicoleta Marin, Senior Financial Analyst, Coface Romania.

“In the first 11 months of 2020, Food retail has halved its growth rate (5.7% in adjusted series) compared to the evolution generated by the sector in 2019. Taking into account the specific context determined by the pandemic, the evolution during 2020 must be read in a deeply positive note, the Food retail being, together with Constructions, the internal sector with the most robust evolution in terms of growth rate. For the current year (2021), we will carefully monitor the variables that traditionally shape the dynamics of this sector, namely the evolution of unemployment, the evolution of the average wage and consumer sentiment" stated Bogdan Nichișoiu, Rating Manager, Coface Romania. 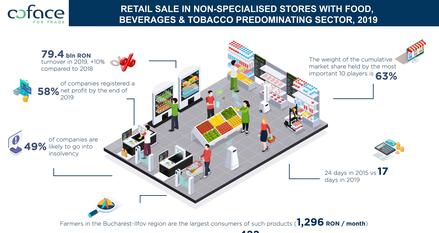