COFACE STUDY: INSOLVENCIES IN ROMANIA INCREASED BY 16% IN THE FIRST SEMESTER OF 2022 COMPARED TO THE SAME PERIOD OF THE PREVIOUS YEAR

The latest Coface Romania study shows that in the first semester of 2022, 3,510 new insolvency proceedings were opened, up by 16% compared to the previous year, and 6% above the level before the Covid-19 pandemic. Financial losses caused by insolvent companies in the first half of this year reached 2.7 billion lei, up by 36% compared to the similar impact in the same period last year, and almost at the same level as all the losses generated by companies that entered into insolvency in 2020.

Businesses in the current context

The business environment has been going through challenges since the beginning of the pandemic. The year 2020 was marked by the padlock effect and unprecedented uncertainties, 2021 saw a rebound, and 2022 began with the Russia-Ukraine war. By analyzing the economic context, we can better understand the framework in which companies operate.

Investments do not represent the main engine of economic growth and development of active companies in Romania. The sectors where investments accelerated during 2021 compared to the national average (approx. 15% average net increase in the fixed asset base) are agriculture (+23%), construction (+19%), HoReCa (+17%) and electricity production and supply (+16%).

The average duration of debt collection in of the entire business environment decreased to 92 days during 2021, compared to 117 days in 2020, similar levels reported only in the period 2010-2012. On the other hand, the financing granted to non-financial companies by credit institutions registered an unprecedented jump during 2021. Thus, the balance of bank loans granted to all companies at the end of 2021 was 145 billion lei, with an increase of 22 billion lei compared to the end of the previous year.

"The first semester of 2022 reveals an economic and business environment full of challenges. The situation of insolvencies in H1 confirms the tensions that companies go through in an attempt to survive in a constantly changing environment. In this context with many uncertainties and challenges for the business environment, probably the number of companies that will interrupt their activity will register a double-digit increase, the amplitude and financial impact caused by insolvent companies being dependent on the evolution of the geopolitical context and the macroeconomic framework. It is important to follow all these developments carefully and respond to needs with solutions anchored in the current reality. As a provider of credit risk management services, Coface will continue to support the business environment through solutions based on the know-how gathered in over 25 years of presence on the local market," declared Alina Popa, Country Manager, Coface Romania.

The evolution of insolvent companies

According to the data published by the Payment Incidents Center provided by the National Bank of Romania, the amounts refused to be paid with debit instruments during the first semester of 2022 totaled only 0.7 billion lei. The average value of payment incidents registered in the first semester was 53k lei, in line with the average of recent years.

"The business environment is going through a complex storm: the labor market is strained due to rising wages and inflationary pressures, margins are under pressure, financing costs have increased, logistical challenges are amplified by the increased risk of contagion, and the geopolitical context is very unstable. In this context, companies are increasingly concerned with faster receivables collection and analysis of business partners. Moreover, the complexity of the business ecosystem implies the need to assess the risks of suppliers and the most important competitors, or the customers of important customers. It is no longer enough to analyze only your business partners",added Iancu Guda, Services Director, Coface Romania.

Most insolvencies opened in the first semester of the current year were registered in the construction sector (710), followed by retail trade (467) and wholesale and distribution trade (407). While the number of insolvencies in the commercial sector is relatively stable compared to the same period of the previous year, the construction sector reports an increase of almost 50%, the main challenge being the high degree of indebtedness combined with the decrease in lending to the residential segment due to the significant increase of interest rates.

If we analyze the number of insolvencies in relation to the total number of active firms, the most impacted sector is the manufacturing of textile products, clothing and footwear, which recorded an insolvency rate of 24 companies per 1,000 active firms, almost 3 times above the national average.

Outlook of the business environment

The number of companies that stopped operating in the first half of this year was 62,567, 12% up compared to the same period of the previous year. At the same time, the number of newly registered companies increased to 76,962, of which LTD represents 57,808, with 7% more than the same semester of the previous year, thus representing the maximum of the last decade from the perspective of the semiannual evolution. The coupling of the significant increase in companies ceasing their activity (+12%) with newly registered ones (+7%) may also indicate a migration of old businesses to new ones.

Looking forward, the main challenges for companies derive from pressures on profitability and slow investment due to rising interest rates, low consumption and fiscal uncertainties. All these will increase the difficulty of repaying commercial and banking debts, which will fuel the continuation of insolvencies rise trend.

In the present study, newly opened insolvencies were considered based on data published by BPI (Bulletin of Insolvency Procedures). For example, all the companies with insolvency procedures opened in the first half of 2022 (according to BPI) and not listed as being in operation in mid-July 2022 (according to ONRC), were considered newly opened insolvencies during the first half from 2022. 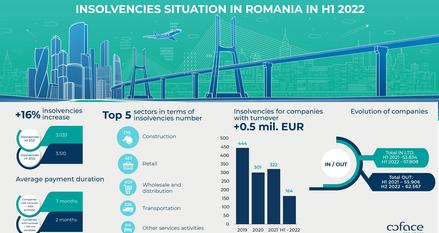 Download this press release : COFACE STUDY: INSOLVENCIES IN ROMANIA INCREASED BY 16% IN THE FIRST SE... (319.64 kB)