In the second quarter of 2016, seasonally adjusted activity decelerated to 1.5%, down from the 2.5% (year-on-year/YoY) reported in the previous period.  Industry, which shrank by 1.5% in Q2 compared to Q1, was the main contributor to this weak result due to the fall in oil production and challenges faced by manufacturing and construction industries. The services sector also slowed during the period, to a growth rate of 2.4% YoY, down from 3.4% for the first quarter 2016. 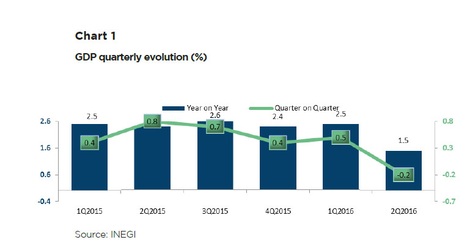 José Antonio Meade, the country’s newly appointed Finance Minister, presented a 2017 budget that signals the government’s intentions to step up austerity. The budget included a 240B MXN cut in expenditure, approximately 12.9B USD and 1.2% of GDP. This is well above the cuts of 169B MXN for 2016 and 124B MXN in 2015. Most of the reductions will come from funding of the state-owned oil company PEMEX (-5.3B USD). It appears that the government is shooting itself in the foot, as lower investment in the oil company will further reduce oil production, limiting future tax revenues.

In addition to these budget cuts, the sharp depreciation experienced by the Mexican peso this year has reduced consumer purchasing power.  In a comparison of 61 currencies, the Mexican peso reported the third largest negative variation during the period from January to September 2016 (-12% YoY).  It stood only behind the British pound and the Argentinean peso.

The environment will remain challenging in the short-term, slowing momentum in sectors related to private consumption. Coface is downgrading its risk assessment for the country’s retail and automotive sectors, while commodity dependent sectors remain at risk.

Automobile industry: Experiencing slow down. Between January and September 2016, the industry’s performance slowed to 0.9%, on a year-on-year basis.  As the Mexican auto industry is highly export-oriented, this lacklustre result is mainly due to lower exports, particularly weaker sales to the US.

Chemical industry: Not yet benefitting from oil reforms. The positive effects of the landmark energy reforms approved in December 2013 have not yet materialized, as lower international oil prices have reduced the segment’s attraction for investors.  The recent budget cuts, of 5.3 billion USD in funding for the country’s public oil company, will be a further factor in declining oil production.

Construction: Civil construction undermined by scarce public resources. Some infrastructure projects have been delayed or cancelled due to lower tax revenues from the oil industry.  The Mexican Chamber of Construction Industry expects public investments in construction to be reduced by 30% in 2017.

Services: Growth expected to decelerate. The relatively good performance of the services sector is backed by positive income fundamentals.  In the near future, this rhythm of expansion is expected to slow, as the population begins to more intensely feel the counter effects of the tightening monetary and fiscal cycle.

Pharmaceuticals: Activity supported by increasing life expectancy. The segment shows good long-term prospects, as the country has a population around 120 million inhabitants and life expectancy is rising. In the short-term, however, the sector will be impacted by cuts in the federal budget.

Retail: Income fundamentals expected to deteriorate in the near future. After being impacted by the 2008-2009 economic crises, the segment has since reported solid growth.  In July 2016, sales showed an increase of 7.9% year-on-year.  Nevertheless, growth should start to decelerate, as consumers begin to feel the effects of rising inflation and interest rates.

Steel: Weak global and domestic scenario. Mexico’s steel production decreased by 0.3% in the first eight months of this year, YoY.  The environment will remain sensitive in the near future. From a global perspective, it would appear that China´s pledges to reduce its total capacity will take some time to materialize. Meanwhile, Mexico’s domestic market will continue to be partially undermined by the lackluster activity in construction.