How did CEE Top 500 companies perform

The twelfth CEE Top 500 study provides an outlook on the future and summarizes the region’s economic activity of the previous year, showcasing CEE as a region of prosperity. Moreover, it describes the condition of the 500 largest companies in CEE by their turnover. Declan Daly, CEO of Coface Central and Eastern Europe, explains that "in 2019, the majority of companies in the CEE region took advantage of the continued favourable economic environment which was especially the case for smaller export-oriented economies.” The aggregated turnover of the 500 largest companies increased by 5.5% to EUR 740 billion. 373 listed companies (which is 74,6% of all companies compared to 79% in 2018 and 80% in 2017) recorded an increase in revenues. Consequently, only 25.4% recorded a stagnation or a decrease. The average turnover of the 500 largest companies increased to EUR 1,480 million, compared to EUR 1,396 million in 2018.

Poland gained first place in both the number of companies and the turnover generated, with aggregated Polish companies’ revenues rising by 6.6%, reaching EUR 283.7 billion. Even though the number of Polish companies included in the CEE Top 500 ranking decreased by 12 (i.e. from 175 to 163 companies), its industrial structure remains the most diversified but none of the largest industries dominate. The second place belongs to the Czech Republic, with a total of 78 companies, corresponding to an aggregated turnover of EUR 115.4 billion, which increased by 2.3%. Hungary dropped to third place. Its total turnover, however, rose much more than the regional average as it accelerated by 6.3%.

60% of the revenue generated in CEE is allocated to the largest companies, represented by three key sectors: automotive & transports, oil & gas, and non-specialized trade. The largest increase in turnover was recorded in textiles, leather, and clothing (+23.2%), and construction (+13.6%). According to Declan Daly, “positive growth was only generated in construction, electronics, information & telecommunications, and non-specialized trade sectors. Metals, mechanics & precision, as well as wood & furniture, generated a lower turnover compared to the year before. On the other hand, net profits were down in all but 4 of the 13 sectors.”

The top three companies of CEE Top 500, well known from previous rankings, are Polish PKN Orlen (1st place), Czech Skoda Auto (2nd), and the multinational oil and gas company MOL Hungary (3rd). It is worth mentioning those companies which made a giant leap in the ranking: Polish Totalizator Sportowy (53) moved up 114 places with revenues that soared by 80%. Strabag Poland (197) generated 40% higher revenues compared to the previous year and gained 86 places. Bulgarian Astra Bioplant Ltd (219), a manufacturer of biodiesel fuel, moved up 155 places in the ranking with turnover increasing by 61%. Slovak gas transmission operator Eustream (286), with the highest improvement in the ranking, gained even 255 places as its revenues rose by 76%.

Based solely upon the number of companies, the automotive & transport sector is once again the largest (1st place). In 2019, sales of new vehicles were weaker than in previous years but still recorded positive dynamics. According to Grzegorz Sielewicz, Regional Economist at Coface Central and Eastern Europe, “changing consumer preferences, the economic slowdown, and delays in adapting to the new emission standards of several European brands resulted in only a slight 1.2% increase in sales of new passenger cars in 2019 in the European Union.”

The second place in the CEE Top 500 ranking with 89 companies (17.8%), belongs to minerals, chemicals, petroleum, plastics, and pharmaceuticals. Its turnover remains the highest in 2019 - a total of EUR 172.1 billion. CEE companies in the sector primarily operate in the downstream segment, i.e. the refining and processing of oil and gas. Non-specialized trade is represented by 73 companies in the current ranking (+2), which puts this sector in third position with a turnover of EUR 113 billion (+9.8%). The average rating score is 6.2, with the weakest companies being based in Latvia, Poland, and the Czech Republic, while the strongest ones are in Croatia and Bulgaria. 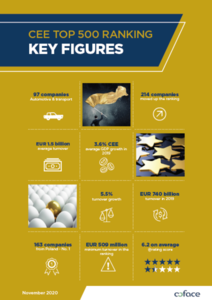