Coface Study: Revenues from the sector of retail with pharmaceutical products in specialized stores increased by 15% in 2018 compared to 2017

In 2018, Romanians allocated over 10% more money each month for purchasing medication compared to 2017.

A new study conducted by Coface Romania on the sector of "Retail with Pharmaceutical Products in Specialized Stores” (NACE 4773) indicates a positive evolution of revenues in 2018, which increased with approximately 15% compared to 2017, with a slightly higher profitability. The study aggregated the data of 4.425 companies that submitted their financial situation for 2018 (as of September 2019) and generated a consolidated turnover of RON 19.07 billion. The weight of the cumulative market share held by the most important 10 players is 31%, which indicates a low degree of concentration.

The companies operating in this sector registered a current liquidity of 1.05 during 2018, the working capital being exposed to negative shocks, in a context of volatility (lower revenues or non-collection of receivables). The average duration of debt collection in the analyzed sector increased from 75 days, the level registered in 2014, to 92 days in 2018, while the national level for the same period dropped from 104 days to 90 days.

“The analyzed sector performed in 2018 in line with the evolution of the revenues and has the potential for further growth, due to the investments made and the interest of the consumers for the commercialized products (both medicines and dermato - cosmetic products, especially in the urban environment). On the other hand, there are some challenges on the structural level of financing (very small working capital, which may cause bottlenecks in operations) and regarding the debt recovery due to the deterioration of the payment behavior of the Health Insurance House (CAS), the average duration of debt collection being above the national average in 2018. Also, we can see fluctuations in the number of specialists (pharmacists), which decreased in 2018 by 1.2%, this tendency being mainly determined by the evolution of the Bucharest - Ilfov region, which registered a decrease of 15%, all the other regions having increased in line with the evolution of the number of pharmacies (except the West Region -0.6%). This is further proof that the pharmacists' market is influenced by the stress from labor market in general,” Nicoleta Marin, Senior Financial Analyst, Coface România

According to the National Institute of Statistics and Economic Studies (INSSE), the value of pharmaceutical products imports is almost 4 times higher than that of the exports. Both have been slightly increasing over the last 2 years, with EU as the main partner for both exports and imports accounting for 73% of exports value. Also, the monthly average sum allocated in 2018 for health in the total expenditures per household, respectively the value for drugs spendings was higher in urban areas (RON 80) than in rural areas (RON 63), increasing by 12%, respectively 13% compared to 2017. The trend can be explained by the income differences between the two environments, as well as by the easier access in the urban environment to the pharmaceutical units.

„The financial vulnerability of pharmacies in Romania has been marked by several trends observed in recent years. First of all, the growth of the network of pharmacies (especially amongst the big chains) has increased the competition, leading to the generalization of the discounts offered to the final customers. As a result, the gross margin at the level of the sector decreased to only 13% in 2018, compared to the level of 18% registered a decade ago. Secondly, the extension of the work points financed by the credit supplier caused the decrease of the working capital, these companies being very vulnerable to the late collection of the debts from the CAS or the slow sale of the stocks. The third essential aspect concerns the increase of the dividends distributed in the period 2016-2017, their cumulative level reaching RON 1.1 billion, almost half of the total from the last decade. The policy of reducing prices for state-settled drugs (culminating in a major blow in 2015), as well as the increasingly slow settlement of CAS bills at the end and beginning of each year (amid the tensions accumulated in the fiscal deficit at national level), feeds further pressures on pharmacies. All these risks are exacerbated by market over-regulation, excessive taxation (clawback tax) and the tendency to reduce drug prices. The biggest risk, however, is for the patients, because all these elements cause a lack of many drugs in the market," added Iancu Guda, Services Director, Coface Romania. 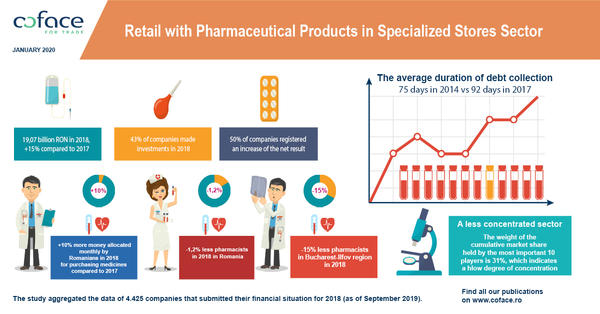 Download this press release : Coface Study: Revenues from the sector of retail with pharmaceutical p... (356.91 kB)