Coface Study: Retail Sale in Non-specialized Stores Sector – positive evolution of revenues in 2018, with an 8% increase compared to previous year

In Bucharest-Ilfov region, retirees spent the most on food and drinks in 2018.

A new study conducted by Coface Romania on the sector of "Retail sale in non-specialised stores with food, beverages or tobacco predominating” (NACE 4711) indicates a positive evolution of revenues in 2018, which increased with approximately 8% compared to 2017, with a slightly lower profitability. The study aggregated the data of 42.051 companies that submitted their financial situation for 2018 (as of September 2019) and generated a consolidated turnover of RON 71.96 billion. The weight of the cumulative market share held by the most important 10 players is 61%, which indicates a medium to high degree of concentration.

The share in the total turnover of the top 10% companies in the sector remained at a high level (89.1% in 2014, in 2018 reaching the value of 89.4%). Thus, the sector is highly polarized, with some large companies generating a high share in the turnover and many small companies contributing less to the total revenues.

The companies operating in this sector registered a current liquidity of 0.94 during 2018, the working capital being exposed to negative shocks, in a context of volatility (lower revenues or non-collection of receivables). The average duration of debt collection in the analyzed sector decreased from 29 days, the level registered in 2014, to 17 days in 2018, while the national level for the same period decreased from 104 days to 90 days.

"Due to the nature of the activity and the trends of consumer behavior, for the analyzed sector, we notice a fairly large polarization: only 2% of the total companies have a turnover of more than EUR 1 million and generate 79% of the aggregated turnover. Thus, the companies that manage the hypermarket and supermarket chains take advantage of the tendency towards consumption of the population in the big cities, while the small companies survive in the areas where their influence is reduced or they are re-profiling towards niche products. It should be noted that a quarter of the companies that submitted their data had no activity (turnover = 0), and more than half of them (55%) have a turnover between EUR 0 and 100.000. According to the National Institute of Statistics the biggest expenses for food and drinks were made by employees in 2018, with the North-West region ranking first, followed by the Center and South-Muntenia regions. The employees in the N/V region have allocated in 2018, on average, RON 5.604 for food and beverages. On the opposite side, there are the farmers from Bucharest Ilfov region with only RON 1.163 spent. Also, the social category that allocated the highest expenditures on food and beverages in 2018 in this region was represented by pensioners,” declared Nicoleta Marin, Senior Financial Analyst, Coface Romania.

"Consumption continued at a fairly steady pace in 2019 as well. Expenditure on wages in the public sector increased by almost 20% and exceeded the threshold of RON 100 billion in 2019 (over 10% of GDP, the highest percentage in the EU), which caused a domino effect in the private environment affected by labor stress due to emigration. Thus, the net nominal wage increased by almost 14% in 2019, reaching almost RON 3.200, of which around 4% were lost through the erosion of purchasing power due to inflation. In this context, the trade deficit exceeded EUR 15 billion in the first 11 months of 2019, the highest level of the last decade, as imports increased more than twice as fast as exports. Macroeconomic imbalances are accentuated by the highest risk, namely the deepening of the fiscal deficit to RON 37 billion in the first 11 months of the previous year, the highest level of the last decade. All these figures highlight the pro-cyclical nature of consumption stimulation, an unsustainable strategy because it is accompanied by the acceleration of inflation, the depreciation of the national currency and the accentuation of the twin deficits (commercial and fiscal). Therefore, the consumption slow down becomes inevitable in the next two years, the most optimistic outlooks indicating an annual advance of 3%-4%, half compared to the pace registered in the last two years (6%-7%)”, declared Iancu Guda, Services Director, Coface Romania. 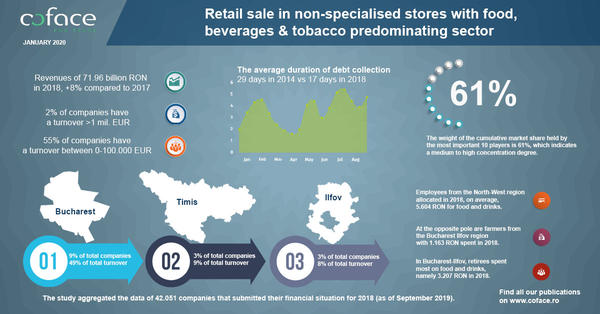