Coface Study - Dairy and Cheese Manufacturing Sector: positive evolution of revenues in 2019, with a 5% increase compared to previous year

A new study conducted by Coface Romania on the sector of "Dairy and Cheese Manufacturing” (NACE 1051) indicates a positive evolution of revenues in 2019, which increased with approximately 5% compared to 2018, with a slightly higher profitability. The study aggregated the data of 494 companies that submitted their financial situation for 2019 (as of September 2020) and generated a consolidated turnover of RON 5.4 billion. The weight of the cumulative market share held by the most important 10 players is 66%, which indicates a medium to high degree of concentration.

The companies operating in this sector registered a current liquidity of 1.52 during 2019, the working capital being exposed to negative shocks, in a context of volatility (lower revenues or non-collection of receivables). The average duration of debt collection in the analyzed sector decreased from 63 days, the level registered in 2015, to 48 days in 2019.

“Although this sector benefits from a relatively constant evolution, given the consumption trends of the population, there are threats that market players should take into account in future strategies.

The financing structure of the activities for almost half of the companies in the sector (indebtedness degree > 80% for 47% of companies, short-term debts represent 100% of total debts for 45% of companies) is a threat that could even determine the exit from the market of these companies.

The increase of dairy products import is an additional pressure, especially in the context of the European Commission Regulation no. 775/2018 entered into force on 1 April 2020 regarding food labeling. Thus, if the raw material does not come entirely from Romania, the label will not display <Produced in Romania> and will display <Produced in the European Union>, which will make products differentiation more difficult for consumers in terms of the manufacturing place”, declared Nicoleta Marin, Senior Financial Analyst, Coface Romania.

“The dairy and cheese manufacturing sector remains polarized, with a high degree of player concentration, the upper echelon being dominated by multinational companies, with robust experience and scalability of the entire production chain (procurement) raw material - processing - distribution that allows them to operate in relatively low margin conditions (single digit - single digit). The “single digit” margins as well as the return on invested capital (ROE) in the vicinity of the local average (ie calculated for all domestic sectors) determine a continuous optimization of local production capacities, a fact visible in the decisions taken by top players during the year 2020.

Compared to adjacent processing sectors, such as meat processing, commodity price volatility has been significantly lower throughout 2020, both domestically and in Europe, the control of this direct cost remaining a priority to operate sustainably in a sector with such a frugal margin.

Vertical integration, optimization of milk production and processing operations, development of brand portfolio visibility, expansion of product categories and market migration in the area of high quality products (eg. bio) are vectors that will dominate the evolution of this sector during the current year“, stated Bogdan Nichișoiu, Rating Manager, Coface Romania. 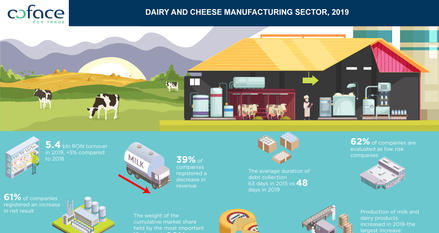