COFACE STUDY: INSOLVENCIES IN ROMANIA INCREASED BY 10% IN 2021 COMPARED TO THE PREVIOUS YEAR

The latest Coface Romania study shows that in 2021, 6,113 new insolvency proceedings were opened, up by 10% compared to the previous year, but still below the level registered before the local impact of the Covid-19 pandemic. The losses of the companies that went into insolvency registered an accelerated growth. The number of employees reported by the insolvent companies in the analyzed period is 30,000.

The evolution of insolvent companies

In 2021 there was an increase in the number of insolvent companies with revenues over EUR 0.5 million (medium and large). Thus, their number stood in 2021 at 322 companies, compared to 301 in the previous year. This evolution is also reflected in the increase of financial losses of almost RON 5.3 billion compared to RON 3 billion in 2020, but also at the social level. If in 2020 the insolvent companies reported a number of almost 20,000 employees, the number increased in 2021 to almost 30,000.

According to data published by CIP (Payment Incident Central) provided by the National Bank of Romania, the amounts refused for payment with debit instruments during 2021 amounted to a total of RON 1.2 billion, half the level of the previous year and almost eight times less compared to the maximum level of refusals of payment recorded in the previous financial crisis (2009-2010). Given that the number of payment incidents in the same analyzed period decreased in proportion to their amount, the average value of payment incidents recorded during 2021 decreased to 42K RON, by almost a third less than in the previous year.

"The increase of insolvencies among large companies can have negative multiplier effects on the economy, due to the high contagion between businesses. Trade credit, thus the financing companies by extending payment terms, continued to grow at a faster rate than the financial credit provided by the banking system. In this context, the economy needs immediate measures to limit the contagion effect, ie the vulnerability of small companies to threaten the immunity of medium and large ones", declared Iancu Guda, Services Director, Coface România.

The top 5 sectors with the highest number of insolvencies cover a similar share in terms of total firms. From this perspective, the most affected sector is the manufacturing of textiles, clothing and footwear, which recorded an insolvency rate of 54 companies per 1,000 active companies. The construction sector registered 34 insolvencies per 1,000 active companies in 2021, 90% of which were small companies with revenues below 0.5 million euros that could not withstand the shocks of increasing raw material costs and high wage pressures. The HoReCa sector completes the podium of the industries with the highest number of insolvencies in 1,000 active companies, being the activity most strongly affected by the restrictions against the Covid-19 pandemic.

“The years 2020 and 2021 are an exception to the classic evolution of a crisis: 2020 was defined by a strong recession with declining insolvencies (the historical minimum), but the recovery of 2021 was an unprecedented economic growth, above expectations and with an extremely volatile environment. The context has affected the business environment, generating numerous insolvencies, but there is still a difference compared to previous crises. Companies' challenges have increased amid rising inflationary pressures (costs of raw materials, energy, gas, fuel or higher interest rates). The pressures will continue to manifest because 2021 was only a preface for the normalization of the environment in 2022, accentuated by the inflation that will increase, but also by the growth of the political and geo-political risks. Given the current economic context, this year will most likely see an increase in the insolvency number to a higher level than before the Covid-19 pandemic." added, Eugen Anicescu, Country Manager, Coface Romania.

Analyzing the evolution for 2021, compared to the previous year, there is a favorable situation for the development of the business environment. Basically, the ratio between the companies that stopped their activity and new businesses has dropped to just 1.14, the lowest level in the last decade and almost twice below the 2010-2020 average.

After a 2020 marked by a visible recession in several sectors of activity, last year saw a significant economic recovery. This was also supported by a maximum record of remittances from Romanians in the diaspora, which sent 3.4 billion euros[1] during 2021, with almost 10% above the entire level of foreign direct investment of 3 billion euros. At the same time, the hasty early easing of restrictions against Covid-19 in the spring of 2021 has contributed to an increased consumption and sustained economic activity. Thus, the economy registered a real growth of approx. 7%[2].

On the other hand, the monthly inflation recorded at the end of 2021 was almost 8.5%, given that the average inflation for the whole year is close to 6%. Inflationary pressures were also supported by rising prices in gas, energy and fuel, with side effects. 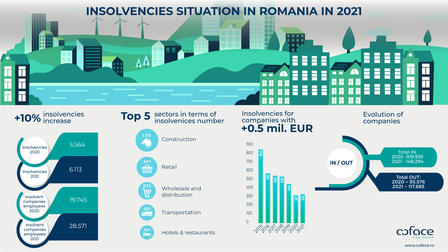