Growth set to slow further in 2019

Growth will remain moderate in 2019, after slowing significantly in 2018. Household consumption is expected to rebound thanks to a slight uptick in employment and purchasing power, driven by various measures. These include the scrapping of employee contributions (effective as of October 2018), the reduction in housing tax, the increase in the minimum wage subsidy (work bonus), the tax exemption for overtime pay and the reduction in the general social contribution (CSG) for pensioners with pensions between EUR 1,200 and EUR 2,000 per month (one third of all pensioners). Real wages are expected to rise, due to both tight labour market conditions – many companies are reporting recruitment difficulties and lower inflation, in line with the decline in oil prices in 2019. The unemployment rate is continuing to gradually decline, but remains high (around 9%). Despite persistently favourable credit conditions, household investment will slow due to the reduction in property subsidies (refocusing of the zero interest loan in tense areas) which will affect construction (building permits were down 7.3% over the first five months of the year after a 7.2% decrease in 2018). Conversely, investment by businesses, which are reporting record-high profit margins (37.9% in Q1 2019), should maintain momentum due to supply constraints, with the production capacity utilization rate at 84.4% by mid-2019. However, since these investments are mainly made using credit, corporate debt will remain on an upward trend (72.6% of GDP at the end of 2018, +3pp over one year). Corporate insolvencies are set to bounce up again in 2019 (+1.7% after -2.5% in 2018) in connection with more muted growth.

Despite the slowdown in France’s main trading partners (rest of the European Union, United States, China), exports are showing resilience, thanks to cost competitiveness gains recorded in recent years. Nevertheless, foreign trade is no longer expected to contribute positively to growth in 2019 because of the rebound in imports. After increasing by 9.2% last year, tourist arrivals decreased by 2.8% in the first quarter of 2019, mainly those of foreign tourists (-6.6%), due to a less favourable global economic environment.

Despite tax revenues driven by resilient activity, the government deficit is expected to widen in 2019. This is due to tax measures to increase purchasing power (estimated cost of EUR 10 billion, or 0.4% of GDP) and to the conversion of the competitiveness and employment tax credit (CICE) into a permanent reduction in employer contributions, which will entail a double cost for public finances in the transition year (estimated deficit excluding exceptional measures: 2.4% of GDP). As a result, the government deficit is expected to temporarily return to over 3% in 2019. Consequently, although its public debt is among the highest in the eurozone, France will be one of the few countries where the debt does not decline.

The current account deficit is set to remain stable throughout 2019. While the goods balance is structurally in deficit as the country is a net energy importer, the services balance is in surplus thanks to tourism revenues. Since 2015, the balance of goods and services excluding energy has become negative, as the deficit in manufactured goods continues to widen, mainly due to the relocation of automobile production and investment in imported machinery. At the same time, this deficit is only partially offset by the excess income generated by dividends from French subsidiaries abroad. The resulting small current account deficit is mainly financed by debt or equity issues held by non-residents.

President Emmanuel Macron’s first year in office saw protests were essentially led by trade unions opposed to reforms aimed at making the labour market more flexible and changing the status of the SNCF (state-owned rail transport company). This transformed into popular protests with the arrival of the gilets jaunes (yellow vests, name for the hi-vis safety jackets that drivers must keep in their cars), protesting against fuel taxes. However, as the movement waned in the spring of 2019, President Macron's popularity rating rose to 32% in June 2019, after having been halved between January and December 2018 (20%). Major reforms to the pension system, including the abolition of special schemes, which are due to be unveiled before the end of the year, could be the source of further protests. However, President Macron has a strong remit after his clear victories in the 2017 presidential and legislative elections, and a comfortable majority in the National Assembly: his party, La République en Marche (REM), holds 308 seats out of 577. In addition, the May European elections confirmed the difficulties of the main moderate opposition parties (Socialist Party on the left and Republicans on the right, respectively 6% and 8% of the votes), which are still rebuilding. The main opponent of the REM is the Rassemblement National (far right), which came out on top in these elections with 23% of the votes (compared to 22% for the REM). 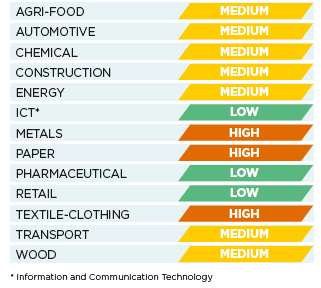 Bank cards are now the most commonly-used form of payment in France, although cheques are still widely used. In value terms, cheques and transfers are still the most popular forms of payment.

If a cheque remains unpaid for more than 30 days from the date of first presentation, the beneficiary can immediately obtain an enforcement order (without need for further procedures or costs). This is based on a certificate of non-payment provided by the creditor’s bank, following a second unsuccessful attempt to present the cheque for payment and when the debtor has not provided proof of payment within fifteen days of receipt of a formal notice to pay served by a bailiff (article L. 131-73 of the monetary and financial code).

Bills of exchange, a much less frequently used payment method, are steadily becoming rarer in terms of number of operations – although in terms of total value they remain important. Bills of exchange are still an attractive solution for companies, as they can be discounted or transferred and therefore provide a valuable source of short-term financing. Moreover, they can be used by creditors to pursue legal proceedings in respect of “exchange law” (droit cambiaire) and are particularly suitable for payment by instalments.

Bank transfers for domestic or international payments can be made via the SWIFT electronic network used by the French banking system. SWIFT offers a reliable platform for fast payments, but requires mutual confidence between suppliers and their customers. France is also part of the SEPA network.

During this phase, the creditor and the debtor try to reach an amicable solution via direct contact, in order to avoid legal procedures. All documents signed between the parties (such as contracts and invoices) are analysed. Where possible, the debtor can be granted an extended time period to pay his debts, with the period’s length negotiated as part of the amicable settlement.

When a debt claim results from a contractual undertaking and is both liquid and undisputable, creditors can use the injunction-to-pay procedure (injonction de payer). This flexible system uses pre-printed forms and does not require the applicants to argue their case before a civil court (tribunal d’instance) or a competent commercial court (with jurisdiction over the district where the debtor’s registered offices are located).

By using this procedure, creditors can rapidly obtain a court order which is then served by a bailiff. The defendant then has a period of one month in which to dispute the case.

Référé-provision provides creditors with a rapid means of debt collection. If the debtor is neither present nor represented during the hearing, a default judgment can be issued. The court then renders a decision, typically within seven to fourteen days (though same-day decisions are possible). The jurisdiction is limited to debts which cannot be materially contested. If serious questions arise over the extent of the debt, the summary judge has no jurisdiction to render a favourable decision. Judgments can be immediately executed, even if the debtor issues an appeal.

If a claim proves to be litigious, the judge ruled competent to preside (juge des référés) over urgent matters evaluates whether the claim is well-founded. If appropriate, the judge can subsequently decide to declare himself incompetent to rule on the case. Based on his assessment of whether the case is valid, he can then invite the plaintiff to seek a ruling through formal court procedures.

Formal procedures of this kind enable the validity of a claim to be recognised by the court. This is a relatively lengthy process which can last a year or more, due to the emphasis placed on the adversarial nature of proceedings and the numerous phases involved. These phases include the submission of supporting documents, written submissions from the litigants, the examination of evidence, various recesses for deliberations and, finally, the hearing for oral pleadings (audience de plaidoirie).

Proceedings are issued through a Writ of Summons (Assignation) which is served on the debtor fifteen days before the first procedural hearing. During this hearing, the court sets a time period for the exchange of pleadings and discovery. Decisions rendered do not necessarily have the possibility of immediate execution. In order to be executed, they must first be served on the debtor. They are also subject to appeal.

Enforcement of a legal decision

Unless the court decision is temporarily enforceable, enforcement can only commence if no appeal is lodged within one month and must occur within ten years of notification of the court’s decision. Compulsory enforcement can be requested if the debtor does not comply with the judgment. Obligations to pay can be enforced through attachment (of bank accounts or assets) or through a third party which owes money to the debtor (garnishment).

France has adopted enforcement mechanisms for decisions rendered by other EU member countries. These mechanisms include the Payment Order under the European Enforcement Order. Decisions rendered by non-EU members can be recognised and enforced, provided that the issuing country is party to a bilateral or multilateral agreement with France. In the absence of an agreement, claimants are obliged to use the French exequatur procedure.

These can be either mandated Ad Hoc or conciliation proceedings. Both are informal, amicable proceedings, where creditors cannot be forced into a restructuring agreement and the company’s management continues to run the business. These negotiations are governed by contractual law throughout their duration. The proceedings are conducted under the supervision of a court-appointed practitioner (a mandataire ad hoc, or a conciliator) in order to help the debtor reach an agreement with its creditors. Both of these types of proceedings are confidential but conciliation can eventually be made public if the debtor has the approval of the commercial court. Nevertheless, the terms and conditions of agreements remain confidential and can only be disclosed to signatory parties.

In all four proceedings, any pre-filed claims are automatically stayed. Creditors must file proof of their claims within two months of publication of the opening judgment, or four months for creditors located outside France. Debts which arise after proceedings commence are given priority over debts incurred beforehand. Certain types of transactions can be set aside by the court, if they were entered into by the debtor during a hardening period (before a judgment opening a judicial reorganisation or a judicial liquidation).

With Court-Controlled proceedings there can be variations in the extent of involvement of the court-appointed conciliator. The sauvegarde and AFS procedures are debtor-in-possession proceedings, but with judicial reorganisation, the court can decide whether to set aside the company’s managers. The role of management is particularly reduced in cases of judicial liquidation, as the debtor company usually ceases to conduct business. Nevertheless, the court can decide for a business to continue operating, under a court-appointed liquidator. 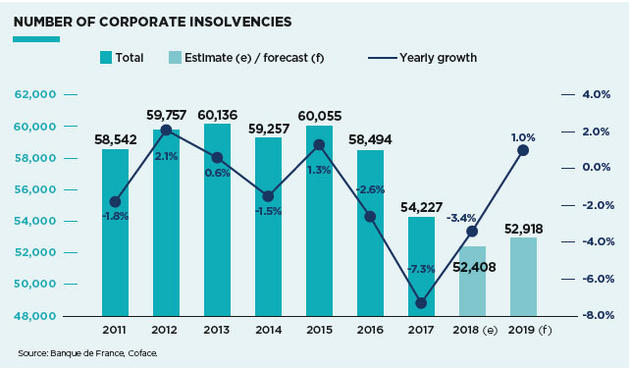