The global economy is in turbulence. China’s economic slowdown and the fall in commodity prices have weighed on fundamentals in sub-Saharan African countries. Growth, at 3.4% in 2015 and 2.6% in 2016 (according to Coface forecasts), is the weakest since the 2008 crisis.

Commodity-exporting countries have been prompted to rapidly implement measures to counter these growing external risks. Many of these countries have attempted to maintain their exchange rates against the dollar - but with little success, due to heavy downward pressure. Several countries have tried to restrict expenditure, in order to stem the deterioration in their public finances. The persistence of these crises has resulted in a continued state of fragility, with deep structural repercussions. Nevertheless, despite strong disparities within the continent, consumer spending is the one factor which indicates that these countries may become profitable markets in the medium-term.

Consumer spending as a way out?

Ranking of countries according to their scores (/100) 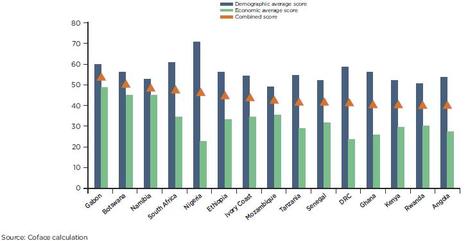 The combined demographic / economic score for the 15 markets that show potential is above, or equal to, 40/100. This group includes the main oil exporters (Gabon, Nigeria, Angola) and several exporters of other commodities, particularly minerals (such as Botswana, Namibia, Ghana, South Africa).

The growth trajectory of sub-Saharan Africa could be curbed by economic crises and political or governance issues, but these factors do not jeopardise the positive medium-term outlook.