Meat Processing and Preservation Sector: negative evolution of revenues in 2018, with 19% decrease compared to previous year

A new study by Coface Romania on the Meat Processing and Preservation Sector indicates a negative evolution of revenues for 2018, with a decrease of approx. 19% compared to the previous year. Thus, the African swine fever (ASF) lead to cuts of over RON 1 billion in the turnover of these companies, the consolidated revenues at sectoral level decreasing from RON 6.13 billion (2017) to only RON 4.96 billion (2018), the minimum in the last 5 years. According to NSVFSA (National Sanitary Veterinary and Food Safety Authority), almost 1.000 outbreaks of African swine fever are registered in Romania, just two months before Christmas. The Coface study aggregated the data of 507 companies that submitted their financial statements for the year 2018 and generated a consolidated turnover of RON 4.96 billion.

Companies in this sector recorded a current liquidity of 0.96 throughout 2018, while the working capital, at a slightly negative level, was relatively exposed to negative shocks and volatility (lower revenues or non-collection of receivables). The average duration of debt collection increased to 64 days in 2018, compared to 55 days in 2017, indicating a significant call for commercial credit received from suppliers. As a result, due to the growing financial difficulties, companies in this sector pay their suppliers almost 3 weeks later, increasing their dependency on business partners.

The marginal increase in profit is due almost exclusively to the price increase in the context of excess demand over the available supply, the latter being affected domestically by the PPA virus. Thus, according to the latest figures published by the NIS (National Institute of Statistics), the average price of pork has increased by 5.4% in the first 9 months of this year, after an increase of 2.5% in 2018 and 5.5 % in 2017 (a consolidated average price increase of almost 14% over the last 3 years).

A polarized sector that is highly affected at the top

Of the 372 companies active* in this sector, only 134 companies registered revenues of over EUR 1 million in 2018, concentrating almost 99% of the sector. The analysis of the evolution of companies with a turnover of over EUR 1 million reveals that in 2017 the frequency of payment incidents, both major and minor, was very low. However, about a year after the first case of African Swine fever virus, the payment incidents of the big companies in this sector exploded, reaching the maximum of the last five years in the 3rd quarter of 2018.

„The Coface study reveals the difficult situation of the meat processing companies operating in Romania: the consolidated revenues have plummeted to the minimum of the last decade, half of the companies are over-indebted, the refused debit payment instruments exploded in 2018, as suppliers are paid with delays, and the outstanding tax liabilities registered in the first semester of 2019 are at the maximum of the last decade. The African swine fever virus (PPA) cut almost 20% of the revenues of companies in this sector, with losses estimated at almost RON 1 billion. Although the authorities declare that the number of active outbreaks has been decreasing lately, there are two months until the winter holidays and 1,000 active outbreaks. The vulnerable financial situation of companies active in this sector, as illustrated by the study, creates the conditions for more imports of meat products for the end of this year and the next one”, stated Iancu Guda, Services Director Coface Romania.

According to an offcial statement of National Sanitary Veterinary and Food Safety Authority, "Since the first report of the presence of the PPA virus in Romania, as of July 31, 2017 and until now, 524,590 pigs affected by the disease have been eliminated and there are 2,208 cases in boars". In this context, the outstanding tax liabilities reported by the companies active in this sector have exploded, constantly exceeding the threshold of RON 500 million in the period 2017-2018, 3 times over the previous average of the last decade. 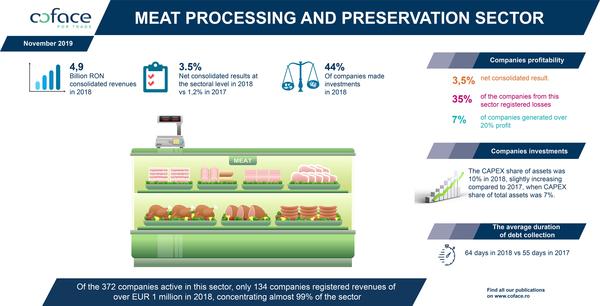