A better year for exporters and domestic trade

The second annual corporate payment survey for Germany carried out by Coface confirms many of the foregone trends. However, some improvements can be seen.

Delays in payment are still commonplace, but becoming less frequent

The second Coface study on the payment experience of German companies has shown that, despite the solid position of the German economy and the decline in the number of corporate insolvencies, delays in payments are still commonplace. However they have become less frequent when compared to the results in 2016. By international comparison, these delays are generally shorter in Germany. As a consequence of the better global environment, the payment experience of export-oriented companies improved. These trends – of the robust domestic economy and sounder external environment – could further improve payment behaviour in 2018.

For 77.6% of the companies reviewed, payment delays are a regular occurrence, but this is an improvement compared to the 83.7% reported in 2016. This is due to Germany’s favourable business environment and the overall good health of German companies. Payment delays remain pronounced among companies that are mainly dependent on export business, where more than 87% are experiencing payment delays (2016: 90%), compared to 75.9% (2016: 82.8%) for companies that concentrate on the German market.

The proportion of German companies with long overdues (of over 6 months) which account for at least 2% of their annual turnover decreased markedly to 8.7% (2016: 13.4%). For Germany’s export-orientated companies however, the picture is less positive, with around 12% (2016: 20%) of companies suffering from long overdues.

Most German companies do not expect a significant impact from Brexit

In this year’s payment survey, Coface also added questions on Brexit’s potential impact on outstanding receivables. The feedback was very clear, as almost 87% of the surveyed companies do not foresee any impact from Brexit and just 3.3% expect an increase in their outstanding receivables. Export-oriented companies foresee slightly more of a negative impact from Brexit (8%), although most (over 84%) expect no impact at all.

From a sectorial standpoint, German companies in the Automotive sector are the most concerned over a possible increase in outstanding receivables due to Brexit, but with a quite low share of 14.3%. The producers of investment goods in Mechanical Engineering (8.5%) and in the Mechanics/Precision Industry (5.9%) are also slightly more cautious on their expectations.

Some sectors are suffering from longer delays in payments, which are significantly above the average. These include in particular the Textiles/Leather/Clothing industry, where the hypothetical average value of payment delays is 54.5 days, followed by Wood/Furniture, with 53.8 days. Using Coface’s model, the shortest delays in payment are in the Mechanics/Precision industries (25.0 days), Automotives (31.9 days) and Chemicals/Oil/Minerals (33.1 days) sectors. 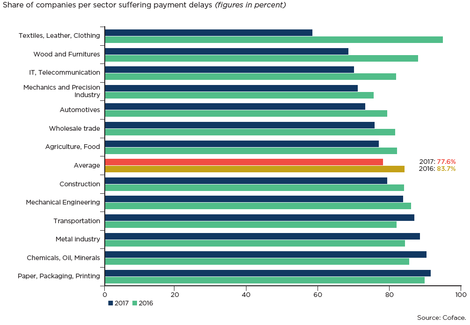 Within this context, no liquidity risks can be seen among the Paper/Packaging/Printing companies surveyed. Similarly, companies in the Chemicals/Oils/Minerals, Wholesale Trade and Metals sectors are among the most relaxed in their respective assessments, as their long overdue payment figures are clearly below average.