Europe remains the big winner in the world economic upturn. World economic growth might not yet be at its highest (2.9% in 2017 and 2018), but there can be no denying that there are healthy signs. This quarter, once again, nearly all of the revised country and sector risk assessments from Coface show marked improvements.

Europe promises a return to growth

The global economy is continuing its recovery, with the growth in world trade stronger than anticipated at the start of the year. Europe’s performance is buoyant and political risks (although not disappearing altogether) are fading. There are more and more positive signs in Brazil and Russia, while capital is once again flowing in some emerging countries. These positive trends have led Coface to improve several country ratings:

Nevertheless, the outlook is not improving for the major English-speaking countries, as illustrated by lacklustre savings rates and wage dynamics in the USA and the UK.

This is compounded by the lack of visibility around Donald Trump’s policies and the outcome of Brexit negotiations.

Within this more buoyant global economic environment, several sectors of activity are rebounding. Industry is the biggest winner, due to its pro-cyclical character. Following on from marked improvements observed in the metallurgical and automotive industries in several of the world's regions during the first half of 2017, other sectors are following suit:

In two major emerging countries, Russia and South Africa, the agrofood industry is confirming its exit from crisis. The sector’s risk is now assessed as "low" in both countries, but for different reasons. In Russia, local businesses are benefitting from the food embargo on Western products, while South Africa’s excellent harvests have provided welcome relief this year.
Coface country assessments (160 countries) are ranked on an eight-level scale, in ascending order of risk: A1 (very low risk), A2 (low risk), A3 (quite acceptable risk), A4 (acceptable risk), B (significant risk), C (high risk), D (very high risk) and E (extreme risk).
Coface sector assessments (13 sectors in 6 geographical regions, 24 countries representing almost 85% of the world's GDP) are ranked on a four-level scale: low risk, medium risk, high risk and very high risk. 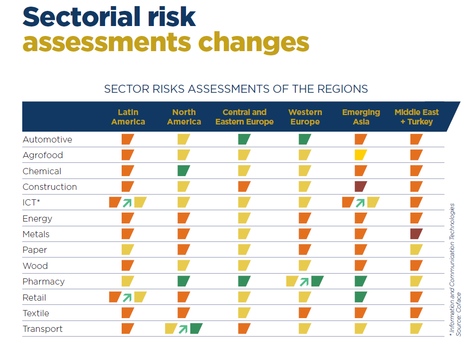