In 2018, economic activity in the CEE region continued its solid expansion that started in 2017. This was especially the case for Poland, Hungary and Latvia, recording GDP growth rates close to 5%. Other countries experienced a weaker pace of growth, mostly Romania, Estonia and Bulgaria. Despite the differences between the countries, the overall economic growth in the CEE region remained solid with 4.3% in 2018 after 4.6% in 2017. “The main drivers were private consumption, increasing fixed asset investments as well as exports, which were less dynamic than before but still expanded despite the Eurozone slowdown,” states Grzegorz Sielewicz, Regional Economist Coface Central and Eastern Europe. In 2018, Coface upgraded Croatia and Slovakia, following a series of Country Assessment upgrades in the previous year. These are the key-findings of the recent CEE Top 500 study of Coface.

The international credit insurance company presents its eleventh annual study on the biggest 500 companies in Central and Eastern Europe – the Coface CEE Top 500. It ranks businesses by their turnover and additionally analyses further facts such as the number of employees, the framework of the companies, sectors and markets as well as the new Coface company credit assessments. The economic development of the CEE Top 500 is representative of the market trend in the entire region.

nalyses show that the favorable economic environment was beneficial for the region’s 500 largest businesses, which translated into higher revenues,”explains Declan Daly, CEO Coface Central and Eastern Europe. The cumulative turnover of all 500 companies increased by a solid 9.6% to 698 billion Euros. 78.8% of the listed businesses recorded revenue improvements (in comparison with 80% in 2017 and 63% in 2016).“However, various challenges caused net profits to decrease by -1.6% to 30 billion Euros.Low unemployment and declining working population trigger labor shortages, which became a main challenge to companies in terms of daily operations and potential expansion. Not only growing wages but also rising input costs have increased companies’ operational expenditures, eroding profits as a result. Competition is getting more intense resulting in low margins which are not able to offset higher costs,”adds Daly.

Big Business in Poland and in the automotive sector

Poland is home to the largest businesses in the region with an aggregated turnover growing year by year, the recent study confirms. The top companies in the Coface publication are well known from previous rankings. The Polish oil refiner and petrol retailer PKN Orlen remains unbeaten at the top with a 15% increase in turnover. The Czech Skoda Auto (2nd), the multinational oil and gas company MOL Hungary (3rd) and retailer Jeronimo Polska (4th) defended their positions from the previous year, all with increases in revenue.

The automotive sector remains strong in the top 10, represented by well-known brands like Czech Skoda Auto (2nd), Volkswagen Slovakia (5th) and Audi Hungaria (7th). Compared to the previous year, Volkswagen Slovakia moved up the ranks thanks to a robust increase of turnover of 37.5%. Audi Hungaria also recorded a modest increase in revenues by 1.1%.

The three key sectors represented by the largest companies in the region (automotive & transport, oil & gas, non-specialized trade) continue to account for almost 60% of the total revenue generated. However, all industries contributed to the turnover increase, the main contributors being the energy, automotive and trade sectors.

Net profits showed a positive development only for some sectors, with rises between 4.6% (wood & furniture) and 41.9% (non-specialized trade). The construction sector was again the one that struggled the most, with a net loss of -146%, despite revenues increasing by 10.6%.

The minerals, chemicals, petroleum, plastics & pharma sector is back on the pole position and the largest sector, benefitting from increasing oil prices in the first three quarters of 2018. Rising tensions and concerns over world trade caused oil prices to decrease in the last months of 2018. However, supply cuts by OPEC and its allies kept prices above the lows recorded in 2016. Moreover, CEE companies in this sector mostly do business in the downstream segment, i.e. the refining and processing of oil and gas. They were therefore able to adapt their refining margins and did not suffer much from the decline in the price of black gold.

Automotive & transport lost its leading position of the previous year. Company revenues increased +7.6%, while net profits slumped by -11.7%. The weaker results of the automotive and transport sector compared to the previous year reflect the global downturn of this sector. It suffers from cyclical slowdown, increased protectionism and structural industrial changes, including investments into innovations and changes in consumption behavior. The sector’s deterioration is having knock-on effects on Western European countries, such as Germany, where automotive production has been significantly contracting. However, the sector remains an essential economic stronghold for the region.

The third sector on the podium is non-specialized trade. Like the year before, the main driving force of CEE growth was household consumption, which accelerated further in 2018 thanks to low unemployment and growing wages. This positive impact of solid demand is dwarfed by the difficulties experienced in this sector: increasing wages of employees and labor shortages paired with a still price-sensitive client base and high competition are exerting pressure on margins.

“Supply constraints, including labor shortages, a high capacity utilization, rising input costs, and the impact of external slowdown (direct and indirect), are worrying companies active in the CEE region. Household consumption is expected to remain the main driver of growth, although limited acceleration of fixed asset investments and weaker exports will decrease GDP growth. Nevertheless, the scale of slowdown will be limited: Coface forecasts that the average GDP growth of the CEE region will weaken to 3.6% in 2019 and 3.2% in 2020,”addsGrzegorz Sielewicz, Regional Economist Coface Central and Eastern Europe. 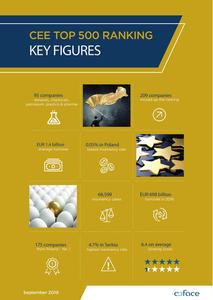