Coface Romania Study: Insolvencies in Romania decreased by 22% in 2019 compared to previous year, reaching its lowest level over the last decade

The majority of insolvencies were registered in the wholesale and distribution sector followed by the constructions and retail sectors
The most recent Coface Romania study shows that in 2019 there were 6,384 insolvent companies, -22% less compared to the level registered in the previous year. The data also indicate a gradual decrease of insolvent companies with revenues over EUR 0.5 million (medium and large companies). The latter reached 444 companies during 2019, below the average of 550 over the last three years. This evolution was also reflected in the decrease of financial losses of only RON 4.6 billion in 2019, half of the average for the last three years.

The active business environment situation in Romania
Coface analysis also reveals a number of vulnerabilities that put pressure on the Romanian companies. The amounts refused to pay with debit instruments during the year 2019 amounted to RON 3.2 billion in total, with 67% increase from the previous year, respectively RON 1.9 billion. The number of companies that interrupted their activity in 2019 increased to almost 160,000, the maximum of the last decade. At the same time, the number of SRL companies newly registered last year remained relatively close to 90,000. In other words, for each new company established in 2019, there were almost 1.8 companies that interrupted their activity, compared to the OUT: IN ratio of 1.6 in 2018.
In comparison to the regional evolutions, active companies in Romania are characterized by an average lifespan of only 10 years, the lowest in the EU. Also, the number of companies that ended their activity is constantly above the ones newly established. Last but not least, the local business environment is characterized by a high degree of concentration amongst the big companies, the first 1,000 companies concentrating half of all the revenues from the entire business environment, respectively 500,000 companies.

“The active business environment in Romania faced a series of contradictory evolutions last year. On one hand, the insolvencies were at the minimum of the last decade in 2019, which could indicate a positive evolution of the business environment, especially amongst medium and large companies. On the other hand, the fact that we have reached the maximum of the last decade in business interruptions, while the number of newly registered SRL companies remained relatively constant, shows us that this dynamic is determined by an entrepreneurial spirit that continues to seek viable and solid solutions for development. Creating a predictable and sustainable framework is essential for maintaining a favorable environment for the development of entrepreneurship and companies in Romania. In this regard, Coface will continue to advocate and be involved in increasing the level of understanding on the essential factors for healthy business and will continue to come up with entrepreneurial education initiatives, in our area of expertise - credit risk management”, stated Eugen Anicescu, Country Manager, Coface Romania.

Sectorial and regional distribution of insolvencies

Most insolvencies opened in 2019 were registered in the wholesale and distribution sector (1,037), followed by constructions (936) and retail (899). Analyzing the evolution of the cases of insolvency over the last 5 years, there is a tendency to consolidate the degree of concentration of volumes in the first 3, respectively 5 sectors. The territorial distribution of insolvency cases in 2019 did not undergo significant changes compared to the situation in the previous year. Thus, despite the decrease of -26%, Bucharest ranked first in terms of the insolvencies number, followed by the regions N/V and S. The largest decreases in the number of insolvent companies were registered in the N/E area (-35%), S/E (-27%) and Bucharest (-26%).

Business environment - main challenges
Compared to what is happening in the region, the companies active in Romania are very young. Thus, 55% of the companies active today in Romania were established after 2010, while only 15% started their activity before 2000. Only 15% of the companies active today have been in business for over two decades, concentrating almost 40% of revenues, half of assets and one third of employees.
The data show that almost 1.4 million companies have interrupted their activity after 2010, while the total of the newly registered companies is only half that level. Also, at the end of 2019, Romania registered only 25 companies per 1,000 inhabitants, twice below the ECE (Central and Eastern Europe) average, as well as three times more insolvencies in relation to the number of companies. 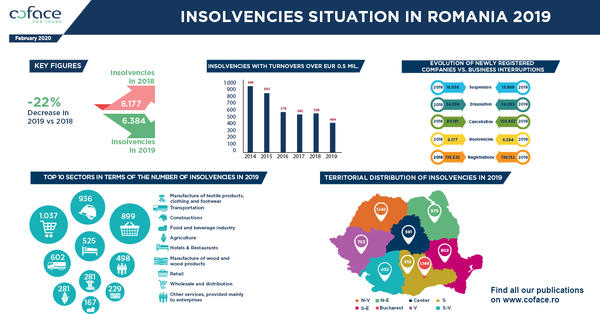