The economy is expected to grow vigorously in 2022, albeit at a weaker pace than in 2021. While the country pursued a “zero-COVID strategy” since the beginning of the pandemic, prompting strict lockdowns (notably soon after the first community transmission of the Delta variant in August 2021), the country adopted a new system of living with COVID-19. The new “traffic-light” system (depending on exposure to COVID-19 and vaccination rates) aims at ending strict restrictions on mobility and allow businesses to reopen, including in Auckland, the country’s largest city (38% of GDP in 2019). Lesser restrictions in 2022 will support private consumption (over 60% of GDP), which will drive economic activity. It will be further supported by a record low unemployment rate (3.4% in September 2021). Nonetheless, household debt - fuelled by a surge in housing prices (99.4% of GDP and 168% of their disposable income) and low population growth due to lower immigration - will continue to weigh on private consumption. Furthermore, inflation, which is expected to remain high, could erode household disposable income. Inflationary pressures are nonetheless expected to gradually ease, as supply chain disruptions slowly fade. The Reserve Bank of New Zealand (RBNZ) started to tighten its policy and increased interest rates twice by 25 bps in October and November 2021 to 0.75% and should continue in order to curb inflation.  Despite rising interest rates, investment is expected to remain dynamic. Gross fixed capital formation recovered in 2021 to its pre-COVID levels and should continue to increase on the back of a robust housing market. It should also be boosted by public investment and the development of numerous public-private partnerships for infrastructure projects. Exports of services should recover as tourism (15% of GDP, 19% of jobs) is expected to rebound gradually after the country announced it would allow fully vaccinated international travellers to enter the country by the end of April 2022. It is nonetheless very unlikely to reach its pre-COVID level. Moreover, exports of goods, especially agricultural goods (5.8% of GDP) in Asia and in China, its main trading partner, should remain robust.

Public deficit should continue to narrow

Before the pandemic, New Zealand had a strong fiscal position, which allowed it to boost expenditure to support firms and households during the crisis. The total fiscal response represented about 20% of GDP and translated into a large fiscal deficit. However, with some of those fiscal support measures expiring, it is expected to start narrowing in the 2021/22 fiscal year. Expenditures will still remain high, with a large bulk of spending allocated to social welfare (31% of total spending) and health (17%) in the budget. With robust economic activity, revenues, driven by tax receipts, are expected to keep growing. While public debt should continue to increase, its share relative to GDP will remain relatively low compared to most developed economy peers.


The current account deficit is expected to widen further in 2022. In 2021, despite robust exports, supported by external demand for agricultural products, the trade balance shifted to a deficit, as domestic demand improved and weighed on the import bill. In 2022, it should deteriorate further due to improving consumption. After turning into a deficit in 2021, the balance of trade in services is likely to narrow, as easing border restrictions will support tourism receipts. The current account deficit will be further aggravated by the income account, which is structurally in deficit due to profit repatriation by foreign investors and debt servicing costs (external debt accounts for 93% of GDP). The current account deficit is traditionally financed by large financial and capital inflows, mostly in the form of portfolio investment and FDI.

New Zealand is a stable parliamentary democracy with strong institutions. Rewarded for its management of the crisis in the parliamentary elections in October 2020, the Labour Party, led by Prime Minister Jacinda Ardern, secured 65 seats (out of 120, with 19 additional seats), allowing it to obtain an absolute majority in Parliament. However, the Prime Minister’s popularity has somehow faded in 2021 (47% in November 2021 compared to 65% during the first lockdowns) as the country struggled to contain COVID-19 outbreaks despite strict containment measures. This could have exacerbated discontent in Auckland, which had been in lockdown for three months from August - after transmission of the Delta variant was confirmed - to early December 2021.


Regarding international relations, the country chose not to align with the Five-Eyes initiative (an intelligence alliance with the U.S., UK, Australia, and Canada) on China’s matters such as the democracy crackdown in Hong Kong or the Uighurs and has been strengthening economic ties with the Asian economy. Most notably, in January 2021, the China-New Zealand free trade agreement was upgraded, expanding market access and removing further tariffs for New Zealand exporters.

Primary payment methods in New Zealand consist of card (debit card and credit card) and electronic credit or debit (direct debits and credits, automated bill payments and electronic transfers). There has been a rapid increase in the use of contactless payments, mobile phone-based applications, and payments using the internet. Although cash remains important, its use is reducing significantly and cheque usage halved between 2013 and 2016. Wire transfers and SWIFT bank transfers are the most commonly used payment methods for domestic and international transactions. Most of New Zealand’s banks are connected to the SWIFT network.

The debt collection process usually begins with serving a letter of demand, where the creditor notifies the debtor of their payment obligations (including any contractual interest due) with a time limit for making the payment.

If the creditor does not receive payment after issuing a letter of demand, a next possible step is to issue summary judgment proceedings. This procedure is intended for situations where the debtor has no defence against the claim. An application can be made to the District Court or High Court, depending on the value of the claim. The District Court has jurisdiction to hear matters for claims up to NZD 350,000, and the High Court typically hears matters for claims above NZD 350,000. A statement of claim must be filed, along with a notice of proceedings, an application for summary judgment and a supporting affidavit by the creditor (or in the case of a company, an individual with personal knowledge of the facts who is authorised to submit an affidavit on behalf of the company), which sets out the facts of the claim. A summary judgment typically involves a hearing, which lasts around one day (if the debtor raises a defence), with evidence given by way of affidavit rather than requiring witnesses. If the application is successful, the Court may enter a judgment in favour of the creditor. If the application is undefended, judgment may be entered by default in favour of the creditor, without the need for a full hearing although an appearance in Court to call the matter will be required. If the defendant is able to show an arguable defence, the Court may decline summary judgment and direct the matter to be heard as an ordinary proceeding.

The High Court determines appeals from the District Court. The Court of Appeal has jurisdiction to hear appeals from the High Court. Appeals are generally restricted to questions of law only. Appeals to the highest appellate court in New Zealand, the Supreme Court, can only be heard with leave of that Court. Leave will be granted if the Supreme Court is satisfied that it is necessary in the interests of justice to hear the appeal.

If the Court enters judgment in favour of the creditor, there is no appeal, or all appeal avenues have been exhausted, the creditor can apply to the High Court, or District Court (depending on the value of the claim as outlined above), seeking enforcement action. This can include a deduction from the debtor’s wages or benefits (if the debtor is an individual), seizure of property, garnishee proceedings, or placing a charge on the debtor’s property.

Foreign judgments must first be recognised by the Court under the Reciprocal Enforcement of Judgments Act 1934, or common law.

Liquidation involves the realisation and distribution of a debtor company’s assets when the company is insolvent, or does not expect to remain in business. A liquidator is appointed to the company, who takes over the management of the company, realises its assets, pays its creditors and distributes the remainder to its shareholders.

The debtor company may go into voluntary administration to try and maximise the chances of an insolvent company continuing to operate, or if that is not possible, to allow for a better return for creditors than immediate liquidation. It enhances the existing creditors’ compromise procedure as an alternative to liquidation, by imposing a moratorium on creditors taking steps to enforce their debts.

The business debt hibernation is a scheme established to help businesses affected by COVID-19. It enables businesses to gain protection from debt recovery actions for a month while they negotiate with creditors, and a further six months’ protection if creditors agree to an arrangement for repayment. The scheme has a number of conditions that must be fulfilled before a business can enter business debt hibernation.

The Disputes Tribunal conducts an informal and confidential process run by a referee to encourage both sides to reach an agreement, or make a binding decision if both sides cannot agree. At the first instance, this is typically a less costly option, as it avoids lawyers. However, the Disputes Tribunal can only hear claims for disputed debts of below NZD 15,000 or, if both parties agree to extend the financial limit, of up to NZD 20,000. 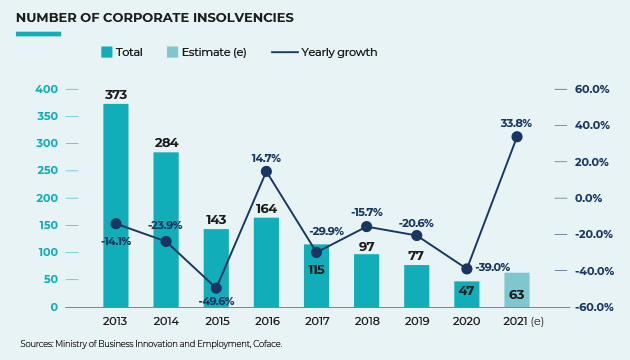