In the Mediterranean, the recent rise in protectionism is starting to transform the vast network of free trade agreements and reshape intra-Mediterranean trade routes. Two new trends are emerging:

Although in Asia the importance of regional trade has grown, countries in the Mediterranean region are struggling to achieve this. This is despite the proliferation of multilateral and bilateral agreements established since the 1995 "Barcelona Process". There is even a downward trend in intra-Mediterranean trade, from 31% of exports in 2001 to 29% in 2016. By virtue of its size, a large proportion of regional trade (79.4% of import and export flows) is concentrated in the Euro-Med sub-region[1], which comprises the Eurozone Mediterranean countries. It has, however, been losing ground over the last 15 years, to the benefit of countries in the South-Med sub-region[2] (10.1%), the Est-Med sub-region [3] (8.4%) and the Balkans[4] (2%).

Despite increased cooperation efforts over the last 20 years, there are numerous explanations for this weak level of trade integration. Competition between the southern and eastern countries that specialise in the agricultural and textile sectors is often the first argument brandished to justify this failure - but there are others. The 2009 crisis and the 2011 Arab Spring negatively impacted the openness of the region’s countries, as they further slowed southern and eastern Mediterranean countries (with the exception of Morocco). Added to this, the succession of introduced agreements has complicated the trading process, with conditions varying between different agreements. In parallel, despite a stated desire to trade more, the number of protectionist measures (such as taxes, anti-dumping measures, public subsidies and quotas) has been constantly increasing. Since 2012, 381 net protectionist measures have been introduced throughout the Mediterranean - nearly half of which directly target other countries in the region.

New trends have been emerging in the export structure of countries in the Mediterranean basin since the 2000s. Euro-Med appears to be losing ground in high value-added sectors, such as automotives and ICT (information and communication technology), in favour of exports of processed agricultural produce and chemicals. The South-Med and East-Med countries are beginning to move upmarket at the expense of traditional sectors such as textiles. These dynamics are less marked in the Balkans, although there is clearly an increase in exports of agri-food goods and metals. In addition, trade between north African countries and eastern Mediterranean countries has been strengthening and new trade routes are beginning to emerge.

The policy adopted by Morocco and Turkey, of joining global value chains by developing and strengthening industrial sectors, has contributed to a reconfiguration of automotive exports within the Mediterranean. In 2016, Turkey accounted for 13% of regional automotive exports (compared to just 2% in 2000), with an increase in flows to Euro-Med countries. During the period 2012-2016, Morocco’s automotive exports to the Mediterranean accounted for 13% of the country's total exports. Although these exports are still mainly destined for the European market, its partners also include Turkey and Egypt.

Both Tunisia and Morocco are undergoing expansion in terms of ICT exports. In Tunisia, this new specialisation is reflected in an increase in exports to the Euro-Med (mainly France, but also Spain) and now accounts for 30% of all the country’s exports to this sub-region. For Morocco, there are evolutions in the main export destinations, with recipients of flows increasing in Spain and Italy, while decreasing in France, Portugal and Malta.

Although energy continues to be the most traded within the Mediterranean, the structure of the sector is changing. Gas and oil exports are losing importance in favour of refined products. Greece and Malta are seeing increasing exports to East-Med countries, such as Turkey and Egypt.

One of Egypt’s traditional industries is the chemicals and plastics sector. Export-oriented, Turkey and Lebanon are its main customers, while flows towards the Euro-Med are up, particularly to France. Cyprus is also targeting East Mediterranean countries such as Israel, Greece and Lebanon.

[4]The Balkans: Albania, Bosnia and Herzegovina, Croatia and Montenegro 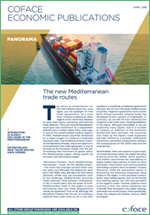 Download this press release : New Mediterranean trade routes will be through the South and East of t... (262.21 kB)