The current global economic situation could be summarised as a gradual recovery for advanced economies and turbulent times for emerging countries. Exceptions to this are the emerging economies of Central and Eastern Europe which, in most cases, are on an improving track. Poland, in particular, is outperforming. On a microeconomic level, company insolvencies in Poland are mirroring its accelerating economic growth. Insolvencies dropped by 5.1% in 2014. This trend is continuing and bankruptcies decreased by 3.3% during the first half of 2015, with economic growth recorded at 3.4% in the same period.

Poland is expected to record broad-based growth. Coface forecasts that the country´s growth will reach 3.5% this year and 3.4% in 2016 - one of the highest GDP increases in the entire region. Better economic prospects, falling unemployment rates, rising wages and improved consumer and business sentiments, have all contributed to higher GDP growth and a decrease in the number of business insolvencies. At the same time, Polish companies have been able to increase foreign trade volumes to new destinations, as well as to their core markets.

“Poland’s increased economic activity has already reached the levels required to stabilise the number of company insolvencies. However the long-term sustainability of improving business could be interrupted by internal or external risk factors. The latter include a slowdown of the Chinese economy. Although this will not hamper Polish companies directly, its indirect impact could be experienced through its effects on Poland’s main export destination – the Eurozone, particularly Germany”, explained Grzegorz Sielewicz, Coface Economist in Poland.

Insolvencies still on the rise in some sectors

The housing market has started to generate positive activity. With better prospects due to labour market dynamics, households are more motivated to purchase housing, especially as they are able to benefit from the lowest historical level of interest rates.

The first half of 2015 brought a 100% increase in insolvencies of companies producing and manufacturing rubber and plastic products. This comes as a surprise, as the plastics sector has recently recorded positive developments. These include growing demand and a significant slump in oil prices, the main commodity used by the sector. However prices of polyethylene and polypropylene rose considerably during the first half of the year, negatively impacting plastic converters.

Insolvencies of transport companies jumped by 28% in the first half of 2015, compared to the consecutive period of the previous year. The transport sector has experienced lower order volumes for Eastern routes (due to the Russian embargo), which were usually more profitable than Eurozone destinations. Moreover, Polish transport companies are suffering from German minimum wage regulations which affect carriages to Germany, a crucial market for Polish transport businesses.

Internal demand is the strongest contributor to Poland’s economic growth. Private consumption (nearly 60% of GDP last year) has risen by a solid 3% in each quarter since the beginning of 2014. The consumer side is benefitting from improvements in the labour market, with falling unemployment and rising wages. Moreover, household purchasing power is being supported by a significant drop in oil prices and the overall deflation of consumer prices. The positive trend is likely to continue, as shown by the high level of consumer sentiment indicators, among other factors. The business environment is more positive. With more orders, Polish companies have increased their workforces, as well as their capacities. During the first half of 2015 companies hired staff (1.1 % compared to the previous period last year), while wages grew by 3.6% in the same period.

According to Coface´s analysis, the dynamics of GDP growth need to reach at least 3.1% y/y in order to stabilise bankruptcies of Polish enterprises. Private consumption needs a minimum growth of 2.9% y/y. Both levels have already been met by the Polish economy. Coface´s forecast assumes that the entire year of 2015 will bring a drop in business insolvencies of 8%. This improvement will be continued next year, when insolvencies are anticipated to decrease by 5%. 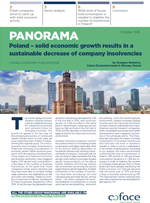